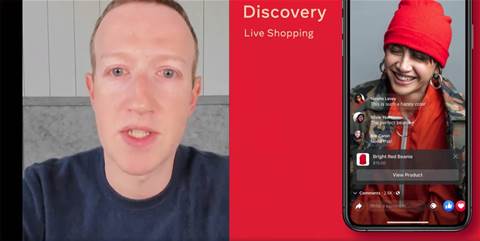 Reveals 'Shops' for businesses to display and sell products.

Facebook Inc is launching Shops, a service that will allow businesses to display and sell products on the world's largest social network's platforms, Chief Executive Mark Zuckerberg said on Tuesday.

Facebook Shops will tie at least some of those efforts together, enabling businesses to set up a single online store accessible via both Facebook and Instagram. A checkout feature will enable in-app purchases, while a more deeply integrated messaging feature will allow customers to chat with businesses through WhatsApp, Messenger or Instagram Direct.

Zuckerberg also said the world's largest social network would be working more closely on product integrations with Shopify and seven other online commerce platforms going forward. He had Shopify CEO Tobias Lütke join him in a livestreamed video announcing the partnerships.

Shopify's shares sank after the initial Facebook Shops launch, then rebounded following Lütke's appearance. Shares of both companies were up over 2 percent in afternoon U.S. trade.

As with Facebook's other e-commerce features, Shops will be free for businesses to access with the expectation it will boost consumer engagement and ad sales.

"Our business model here is ads," Zuckerberg said. "Rather than charge businesses for Shops, we know that Shops are valuable for businesses. They're going to in general bid more for ads and we'll eventually make money that way."

Facebook is also rolling out a tool to connect loyalty programs and a shopping feature showing product tags underneath live videos, allowing viewers to make purchases while watching. Zuckerberg said more than 800 million people engage with live videos daily across Facebook and Instagram.